Does community still matter in the 21st century?

I had the pleasure of being joined onstand at IBTM World in November by Hugo Slimbrouck, a formidable past SITE president. Quite often, our topic of conversation turned to SITE’s 2023 Global Conference, taking place this February in New York City.

In between questions and conversations with members and other show attendees who were curious to learn more, what stands out for me from these conversations were the photos Hugo had — readily accessible — on his phone from past conferences and other SITE events (often spanning decades!), that he was eager to share with me and tell me the stories behind.

It wasn’t just the detailed Venetian costumes from a past SITE event that left an impression though. I left IBTM, dwelling on how clearly Hugo’s memories and the tangible reminders of them that he carries around in his pocket, in the form of the phone photos, reflect the community he’s found — a theme I’ve now been mulling on quite a bit the last couple of months.

I had another great conversation while in Barcelona with Anthony Kelly, a SITE stalwart in his own right, about how the “real” value of SITE is found in its community. Anthony’s comments were incredibly similar to ones my own SITE marketing colleague Aoife McCrum has made about how the SITE Ireland community was a major part of how she found her footing early on after entering the MICE industry.

Community, it’s clear, is a shared value for many of us. But it’s also a value that feels increasingly precarious and threatened.

Just look at the (quite frankly) scary statistics about the rapid loss of friends and lack of deeper friendships. NYU Stern professor Scott Galloway, one of the business minds I turn to most frequently, has written and presented quite a bit about the topic in recent months, linking it to larger workplace performance and employee behavior trends.

I’ve also been thinking back more urgently on research by Robert Putnam, an American political scientist. Putnam is the author of “Bowling Alone,” which argues in part that Americans are growing increasingly isolated as “third space” pockets of community like — per the name of his book — bowling leagues are disappearing from our social fabric and harming our collective social capital.

Community, as Galloway, Putnam, and countless other experts have pointedly shared, is a vital ingredient for a successful, happy life, for many reasons — reasons that are fulfilling both personally and professionally.

I can’t help but look at this research though, hold it up against what’s captured in photos and memories like those of Hugo, Anthony, and Aoife, and wonder if the MICE industry’s community-building golden days have since passed.

We know about the importance of liminal spaces in event design, and the serendipity that happens when you stumble into a great conversation while waiting in the coffee line or for a hotel shuttle at the end of a long conference day. I’ve certainly experienced it myself at least several times in different countries and the most random of settings throughout the last 12 months.

But I also felt nostalgic again and again, after events in 2022, for “another time” like the period reflected in Hugo’s photos, or even in Aoife and Anthony’s stories from when they started in the industry.

I can’t help but wonder if we’ll continue forming, protecting, and growing communities the same ways they did in our industry — and around the events we plan and attend. It sometimes feels increasingly daunting to think about how my millennial peers and I can craft these kinds of spaces generations before us did, that are vital and nearly sacrosanct for growing careers, the industry itself, and making it a welcoming place for future generations.

The exhaustion grows, too, when thinking about the continued spread of technology that makes it easier to work largely in isolation, remain remote from one another, and even removes the “human element” from what we do through automation and new AI tools.

Still, I’m nowhere near ready to call time and retreat so I’m ending this post with a more upbeat challenge I hope the industry community I started cultivating in 2022, and look forward to strengthening in 2023, will join me and help hold me accountable in.

Stealing a final line from the ever-fantastic inaugural SITE Young Leader board member Heidi Dillon, let’s “be where our feet are” this year — and commit to doing so as much as we can when we show up in our workplaces, at industry events, with our friends and family, and wherever else a new year takes us.

I look forward to making new meaningful connections and to deepening existing ones; I’m so incredibly grateful I’ve found connection with immensely inspiring people in pretty much every corner of the planet. My life is richer for it, and I can’t wait to see what re-committing to my community brings in 2023.

I’d also love to hear from you, so we can share it with the wider SITE community: what are your strategies for cultivating a vibrant community? 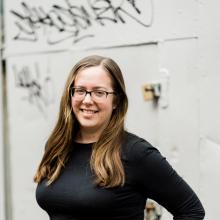 The SITE Crystal Awards – You’ve got what it takes